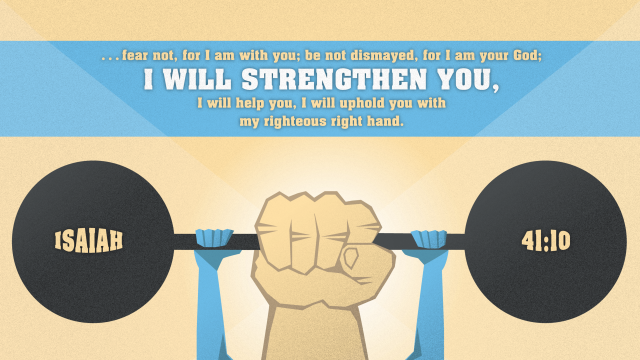 In this section of Isaiah, God is speaking to the Israelites as they are in captivity. They are not free people at this point, and they have been exiled to other countries instead of the Promised Land God had for them. Here, as elsewhere in the context, God is reminding the people that he is with them and he will protect them.

There may have been a sentiment among the Israelites about whether or not God had the power to save his people anymore. They may have forgotten the power and majesty of the God of their ancestors – the God who marched his people through the Red Sea.

There may also have been a sentiment that God could help his people, but he simply doesn’t want to. Here God reminds them that they need not fear because he in fact does have the power AND the will to save them. He WILL strengthen, he WILL help, and he WILL uphold. When we face tough times, it’s easy to forget both who God is and what he desires to do. God is all powerful and he does want what is best for his people – all who choose to follow him.

Don’t forget who you have in your corner while you’re fighting fear and uncertainty, and don’t ever doubt that he will give you the strength you need to make it through!