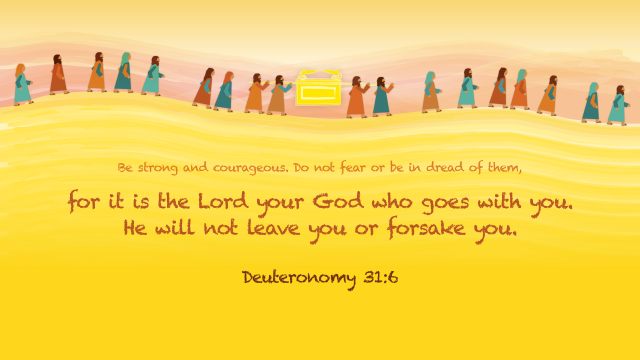 The people of Israel are being addressed by Moses in this verse. They have wandered the wilderness for 40 years due to their disobedience and unwillingness to trust God, and now the new generation is standing on the brink of a new and potentially prosperous time for their people.

Moses has told the people about the Promised Land that God will give them, but there are major roadblocks that they will have to overcome if they are to inherit the land as promised. The main problem is that their enemies already possess the land. As Moses lists off some of their enemies in the previous verses, he then makes the statement in our verse that the Lord will not leave you or forsake you because he goes with you.

He continues a few verses later to say basically the same thing, “The LORD himself goes before you and will be with you; he will never leave you nor forsake you. Do not be afraid; do not be discouraged” (Deuteronomy 31:8). Moses wants to drive this point home. He knows the people will face danger and fear ahead and he wants to encourage them with truth of God’s presence.

The people of God were about to take a huge step in their development as a nation and Moses wanted them to be on sure footing. That foundation was based on trusting the Lord in all things, remembering that God would be with them no matter what.

We aren’t getting ready to conquer enemy nations, but we are facing an enemy of our own. For some, it’s simply getting up each morning and fighting depression. For others, it’s battling their own minds in the “what-if” scenarios that play out in their heads. Whatever your personal battle is, trust in the fact that Lord will not leave you in this, your time of need. Prepare for battle knowing that God’s got your back!